May 2, 2013
Originally from Maharastra but pretty much famous in Gujarat… Spicy and bite-sized… Deep-fried munching that can be easily found at any farsanwala??? Anyone can guess…. it’s “Bhakharwadi”!!!
I always found making it in-house is a tiresome job to do in kitchen!!! And I know… everyone thinks the same. I never knew it was that easyyyyy :) Just gave it a try and you can see the result here…

Makes: 25 (medium-sized)
INGREDIENTS:
For Dough–
————-
1/4 cup Wheat Flour
1/2 cup Besan
1/4 cup Semolina (fine)
Salt to taste
A pinch of Hing
1 tsp Oil
For Filling–
————-
1/2 cup Desiccated coconut
2 tbsp Lemon juice (or tamarind paste)
1/2 tsp Red chilly powder
1/4 tsp Turmeric powder
2 tsp Goda Masala (1/2 tsp Garam Masala with 1/2 tsp sesame seeds can be used as an alternative)
1/4 tsp Cumin powder
1/2 tsp Coriander powder
1 tbsp Fennel seeds (freshly ground)
1/2 tsp Besan
2 tsp Lemon juice
Oil to fry
METHOD:
– Mix all 3 flours, salt, oil and hing in a bowl. Knead a not-so-soft dough using water and keep aside for around 15 mins.
– Take all the ingredients of filling in a bowl and mix well. This mixture will be a little moist due to lemon juice.
– Make 3 equal sized portions of dough and roll each of them using wheat flour for dusting.
– Take each one of them on flat surface one after another and follow the below given process:
– Heat the oil in deep frying pan and fry 5-6 pieces at time till crisp and golden brown.
– Cool down to room temp and store these “Bhakharwadis” in air-tight container.
Linking this recipe to Jagruti’s Cooking Odyssey and UK-Rasoi: 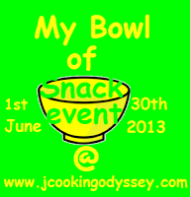 Spare a min to comment on this recipe... Cancel reply